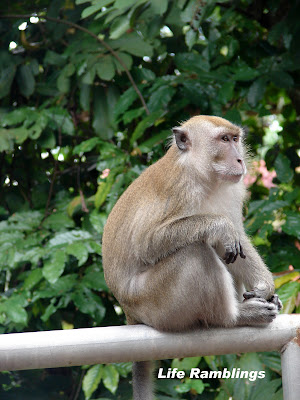 The sight of monkeys roaming around the residential area had become a common scene in my neighbourhood. They have been emerging from a nearby mangrove forest invading homes, stealing food, snatching clothes from the clothesline and even attacking people. There was one time the creature almost attacked my three year-old daughter and tried to steal food from her. Thankfully I was fast enough to grab my daughter from being viciously attacked by the monkey. I definitely can't leave my doors or windows open, otherwise the primates will ransack the whole place. 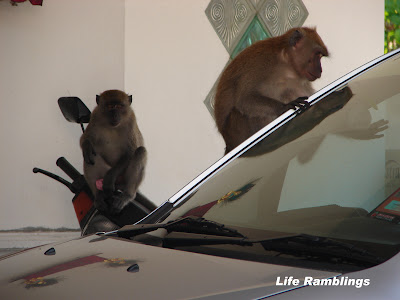 The monkeys can be seen pouncing on my neighbour's car and they were even strong enough to pull out the side mirror of the vehicle. I tried to chase them away but the aggressive monkeys refused to leave, ignoring me, so quickly, in order not to be observed I took some shots of them. One of them was glaring, shrieking at me and in minutes they were gone! Luckily it didn’t advance further. 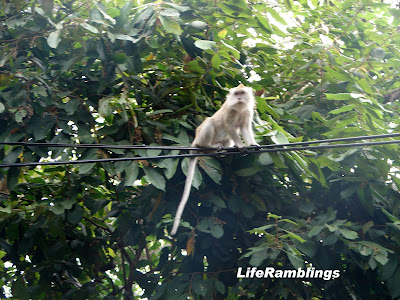 The monkeys enjoyed walking, sitting high on the telephone cables, enjoying a feast of the stolen food, creating havoc. They like flowers too. I've no idea what they do with the flowers.

Last year, the Wildlife Department had employed measures like setting up traps to capture the monkeys and relocating elsewhere. The numbers have decreased and we did not face any problems since then. Unfortunately, we noticed that the monkeys were making an appearance in recent weeks again. I hope the authorities can come up with more effective solutions to tackle the monkey menace here as they are becoming a menace to society.

Posted by LifeRamblings at 5:15 PM