The Blue Mosque in Istanbul

My very first impression when we saw Istanbul's Blue Mosque was how magnificent and incredibly massive it was. We caught our first glimpse of the mosque a few years ago but it was a brief visit and I didn't manage to take too many pictures due to time constraints. Nevertheless, I was so delighted to have had the opportunity to visit it again this year and had a great time taking even better pictures with our DSLR camera. 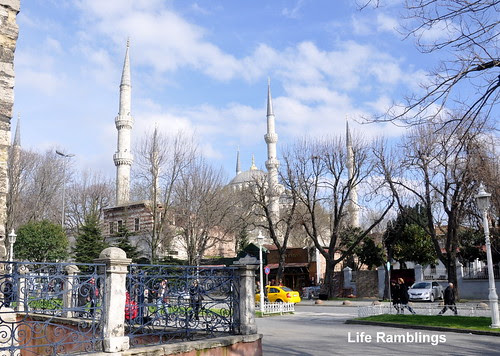 For those of you who have been following this blog for a while, you must have already seen a few shots of the Blue Mosque in my previous post but I haven't include any shots of the interior, so here are more photos and details of the mosque. 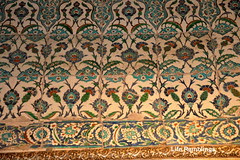 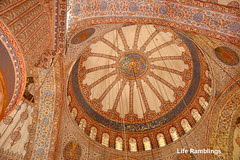 The official name for the Blue Mosque is the Sultanahmet Mosque, named after Sultan Ahmed I, which was built between 1610 and 1617. These days, it's more familiarly known as the Blue Mosque. The name comes from the blue tiles adorning the walls of its interior. More specifically, the interior was decorated with more than 20,000 shimmering blue-green Iznik tiles with more than 50 different patterns, calligraphy and the domes are so beautifully tiled with delicate geometric designs. 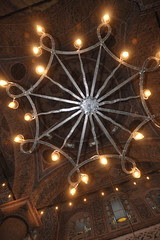 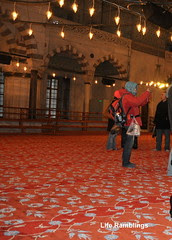 I also noticed hundreds of stunning stained-glass windows with various designs that were a sight to behold as the sunlight cast through them, showcasing their beauty. Apart from that, the floors were covered with lush carpets, and high above I saw many ornate chandeliers. It's a refreshing change from the ornamental cathedrals of most European cities I've encountered. 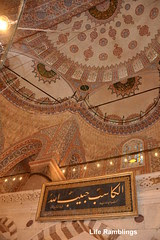 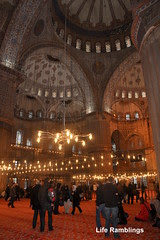 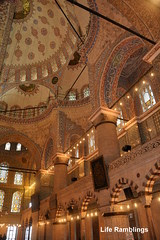 I found that people of all faiths are welcome provided that they are appropriately dressed. Apparently, no shorts above the knees or bare arms and you need to remove your shoes prior to entry. Plastic bags are provided to carry your shoes in. I used my shawl to cover my head but later found out the head covering of a non-Muslim wasn't required. 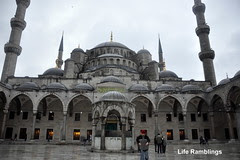 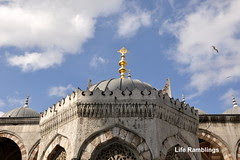 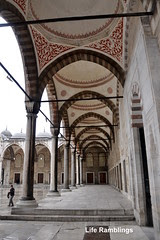 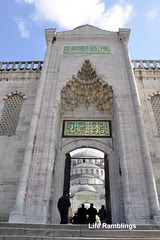 While the interior should not be missed, the outer courtyard is equally impressive too as this give you one of the splendid views of the cascading domes and the amazing architecture. 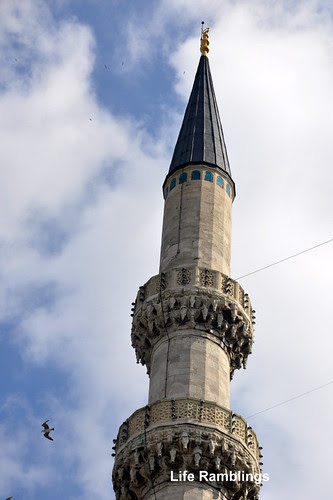 One of the six minarets that stands majestically against the blue sky and as far as I could tell, this is the only one mosque with six minarets in Turkey. 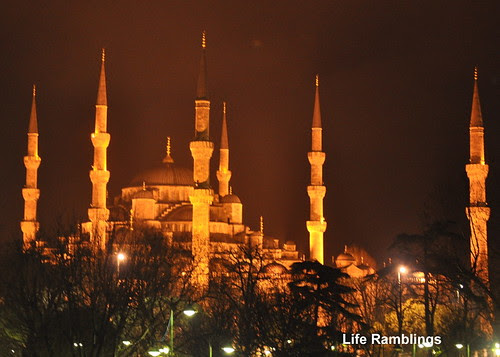 The Blue mosque is beautifully lit up at night. I find it amazing to be able to see both day and night.

That concludes our visit to the Blue Mosque. The outside is spectacular and the inside awe inspiring. It is well worth the visit. On the plus side there is no entry charge but donations are most welcome.

The mosque is open between 9am-6pm daily, except for praying times lasting about half an hour, five times per day and mid-day on Fridays.

That's My World
Posted by LifeRamblings at 1:01 AM