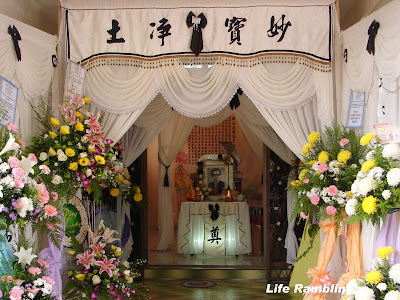 It has been a sad, heart wrenching week for my family. My beloved father-in-law (FIL) passed away peacefully, a few days ago after a long battle with heart disease. He was aged 83.

My FIL has been in the hospital a few times in the past few years for heart and related complications. He was readmitted to the hospital again last week after suffering breathing problems.

As he was getting weak and breathless, he was confined to the hospital intensive care unit, with intravenous tubes and drips. And for a few days, an oxygen mask helped him to breathe which he absolutely hated. He shook his head sorrowfully with eyes closed, at the thought of going home. He must have been frustrated with all the pain and suffering he went through. He looked as though he had given up on life. Perhaps he thought that he had achieved a ripe old age.

When my FIL regained consciousness, through written notepad, he insisted he be taken back home. In the back of my mind, I knew that he was soon going to leave us very soon and at the same time he didn't want to die in the hospital. Eventually we took him home with all the necessary apparatus he would need to help him breathe.

His health began to take a sudden turn for the worse last week. After two battles with heart complications in a few weeks of hospitalisation, he passed away peacefully that night. We cried for him to fight on as we witnessed his final breath. However, it is a blessing that he no longer having to suffer and that he has been freed from his pain.

Memories of him will remain in our hearts forever. I miss him heaps.

Posted by LifeRamblings at 3:41 PM