Changing of the Guards in Athens

One of the best things about Athens is the chance to see the changing of the Guards at Syntagma Square. It is a popular spot for tourists who come to watch the changing procession and visit the Tomb of the Unknown Soldier.

Fortunately for us, the weather was beautiful and our timing was impeccable that we were able to witness the changing of the guards ceremony. It draws quite a large crowd and I was quite impressed. 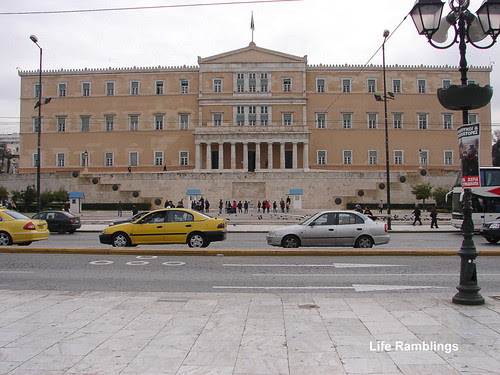 The changing of the guards ceremony is conducted in front of the Parliament building in the public square everyday. It takes place 24 hours a day, every hour, on the hour, you can't miss it. The big parade is on Sundays at 11am, where more guards participate accompanied by a military band. We did not manage to see the big ceremonial changing on Sunday, but it was still amazing to watch. 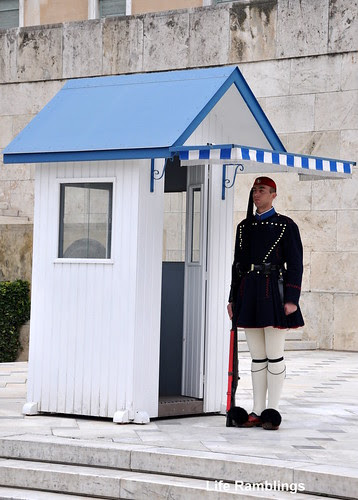 The guards who wear traditional Greek uniforms, seem to take this tradition very seriously. They are trained to keep a straight face, very disciplined and wouldn't respond to all visitors trying to get a funny reaction out of them. 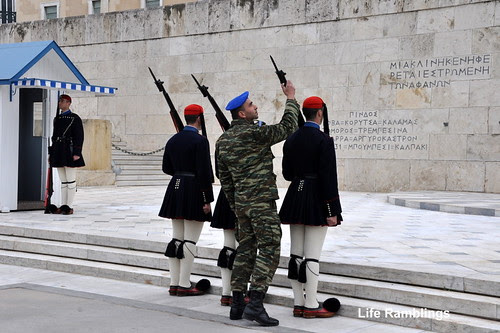 The commander in charge even stood by to keep a watchful eye on the guards and make sure they were focused on executing their routines well . 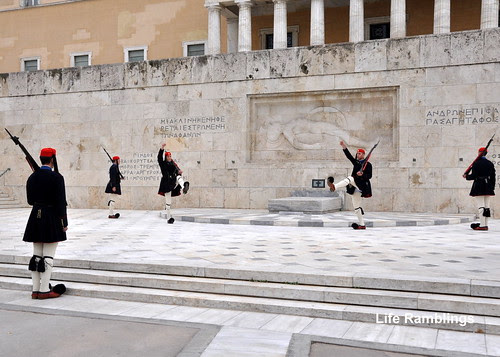 As their commander kept watch, we observed the guards performed the routine of stomping, swinging their limbs, military stunts and marching in unison, with the tomb of the Unknown Soldier in the background. It was fun to watch and is definitely something everyone should see while in Athens. 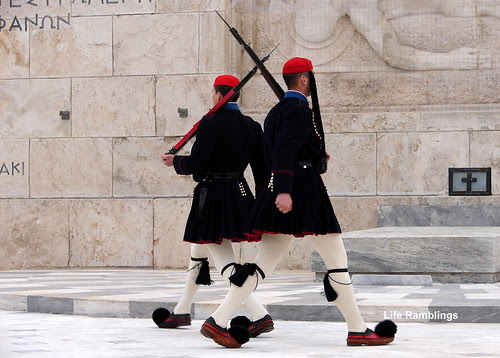 The Evzones are carefully selected for the honour of participating, and they must stand over six feet tall and have the ability to stand motionless for a few hours. They have pom poms on top of their shoes and wear a short pleated skirt with long white stockings. 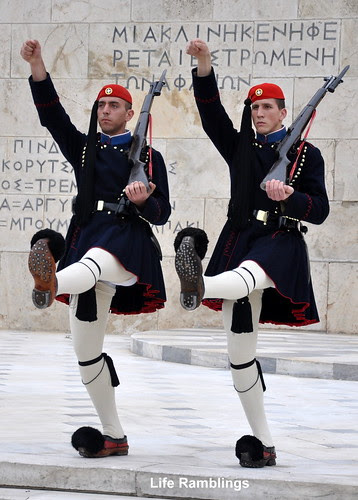 After the Guards finished their routine, we were allowed to take pictures with them but they are strict on some criteria like

If an Evzone feels insulted, he will slam his rifle down hard in order to get your immediate attention or either their commander will give a shout out to any annoying onlookers, so you better not mess with them. Obviously, I didn't get into trouble and managed to take a few decent pictures with the guard but I get a scary feeling and my heart beats real fast.

Ruby Tuesday
Posted by LifeRamblings at 7:48 AM