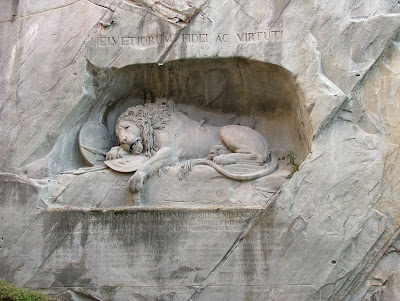 The Sleeping Lion or Dying Lion of Lucerne is one of the world's most famous monuments. It was carved out of natural rock and was built in 1820 in memory of the Swiss Guards that were killed during the French Revolution in 1792 in the service of the King of France, Louis XVI.

I could not believe my eyes when we came upon this amazing site. It was so wonderfully crafted and truly realistic. Mark Twain, the well-known American author described the Lion of Lucerne as "the saddest and most moving piece of rock in the world." He was absolutely right. I haven't seen too many pieces of sculpture that looked mournful or moving but I personally have to agree with this description. You can see and feel the sadness on the lion's face distinctively.