A symbolic statue of a dog spotted at the Mendeleyevskaya subway station of Moscow. It's about a sad animal abuse story. 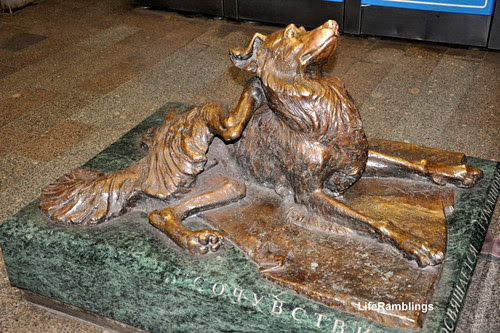 Malchik was a black mongrel stray dog living in Moscow. For about three years, Malchik lived at the Mendeleyevskaya station on the Moscow Metro. Malchick became a popular station ‘resident’ among rail employees and commuters and territorially protected the station from drunks and other dogs. Unfortunately, he was brutally killed when a 21-year-old woman Yulia Romanova stabbed him with a kitchen knife who was said to have become angry when he barked at her and her beloved Staffordshire terrier.

Romanova was arrested, tried and later it was revealed that Romanova has a long history of cruelty to animals and psychiatric treatment. The horrible incident sparked a wave of public outrage regarding the cruelty treatment to animals and in 2007, a monument entitled "Compassion" or "Sympathy" was erected at Mendeleevskaya station in memory of Malchik.

Animal abuse is so sad and I am deeply hurt and saddened that such things can happen to animals these days. This memorial serves as a symbol of respect to all living creatures and a symbol of protest against inhuman treatment of a stray pet.

Posted by LifeRamblings at 10:20 PM