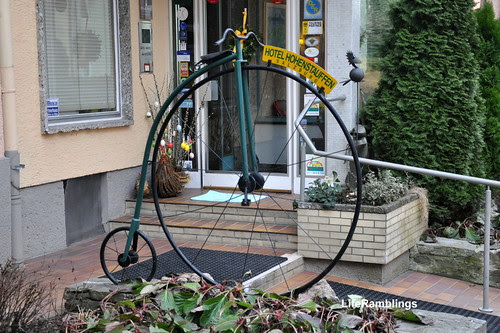 A high wheeler spotted in front of a hotel in Salzburg. It seems like the front wheel is roughly 4 times bigger than the rear. Fancy riding on it, anyone? It looks cool but dangerous to ride. I can't imagine how anyone could ever ride this contraption without falling off!

Although now commonly known as a Penny farthing, the bike was generally known as a high wheeler in the 1880s when it was made. After the introduction of the safety bicycle with two equal size wheels and a rear chain drive, it was known as the ordinary and later the penny farthing. It was named that because the two wheels resembled large and small British coins.

That's My World
Posted by LifeRamblings at 1:08 PM