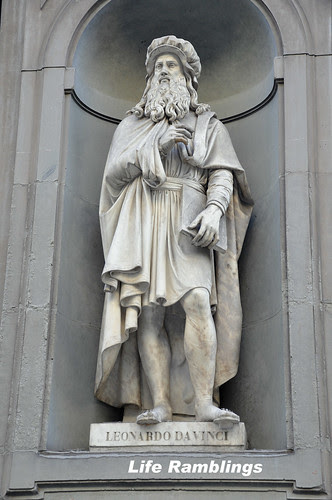 An awesome statue to commemorate a true historical figure. Both shots were captured outside Ufizi gallery in Florence, Italy 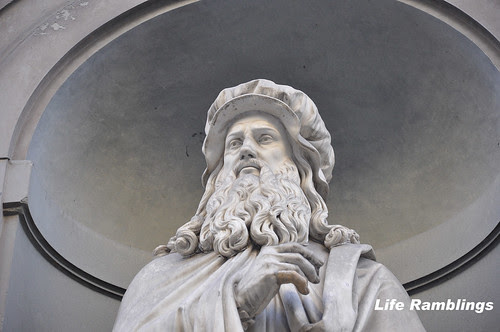 Leonardo da Vinci is best remembered as the artiste of the Mona Lisa and The Last Supper. But he's equally famous for his astonishing talents in architecture, sculpture, engineering, geology, hydraulics and the military arts, all with success, and in his spare time doodled parachutes and flying machines that resembled inventions of the 19th and 20th centuries. During his lifetime, he also made detailed drawings of human anatomy which are still highly regarded today. Leonardo also was quirky enough to write numerous notebooks and sketches for countless advanced machines, with descriptions written in secret mirror writing, a trick which kept many of his observations from being widely known until decades after his death. Many of them were apparently never executed, but they anticipated modern inventions through the years to help scientists and inventors make new discoveries.

He had sparked public interest in 2003 with the publication of The Da Vinci Code, the bestselling thriller by author Dan Brown.

Leonardo da Vinci was a true genius of his era, and I wish we had a few more like him for the benefit of our future generations.

First Commenter - Caite
Posted by LifeRamblings at 7:29 AM