Following up with my previous post, here are a few more photos of Moscow's subways. 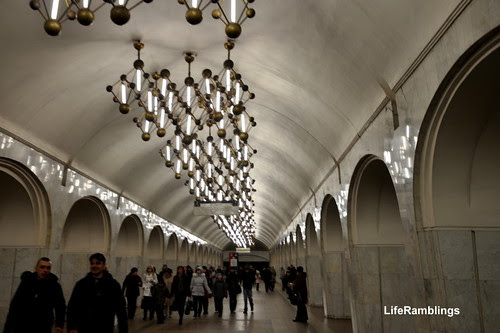 There is always something interesting to see while walking through the Moscow metros. Many of it's most beautiful stations were built during the Stalinist era and I find each station absolutely stunning and I can safely say that all metros are pretty much grafitti free! The above shot was taken at the Mendeleevskaya metro station and I really like these unusual light fixtures which looks like molecules structures. I found out that it was named after the Siberian chemist, Dmitri Mendeleev, who put together the periodic table. Hence the station's unusual lights, in a shape mimicking molecular chains.

Photos were strictly forbidden but despite the tight security everywhere, I was glad that I managed to sneak a few photos of the stations. 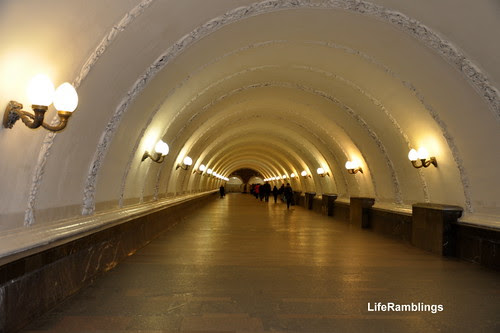 This is another station I managed to capture but I don't remember the name of this metro. This one looks much plainer, but still tastefully and uniquely designed. 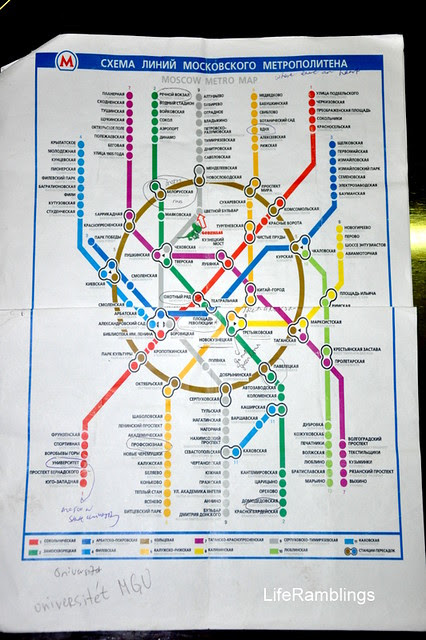 Here is an example of how Moscow's subway map looks like. There are 11 different lines each designated and distinguished by different numbers, colours and names of the stations. Interchanges can be confusing and complicated as all signs are in Cryllic with no English translation underneath them. I don't speak any Russian myself, but it is still possible to navigate around. We basically counted the number of stops of our destination and then hoped it was the right one but a word of caution, peak hour is strictly not for the faint hearted.

That's My World
Posted by LifeRamblings at 1:27 PM