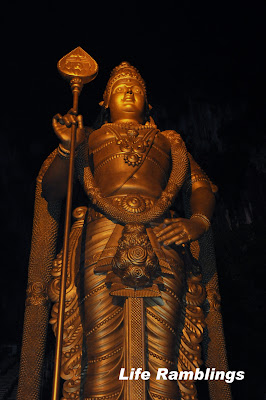 This is a shot of the giant golden statue of the Hindu deity situated at the entrance of Batu Caves. Standing at 141 ft tall, this statue is world's tallest statue of Lord Murugan that was unveiled in 2006. To give you an idea of scale, I would say an average sized person would be roughly about the size of the statue's foot! 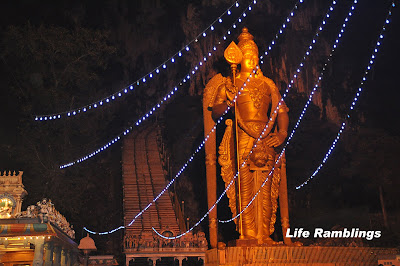 We were passing by KL and it was an amazing sight to behold to see such a giant statue in all its glory. The setting was truly charming, quiet and serene. To reach the Temple caves which is on top of the stairs is a mean feat of endurance. You need average level of fitness, and a high tolerance to the extreme hot weather conditions to climb up the 272 exhausting steps. During my previous trip, I went all the way up to the top, feeling so out of breath. Coming down was even tougher, my knees turned all wobbly by the time I was back on flat land.